At a conference in the spring of last year, I was somewhat infamously quoted as saying that we were selling everything that was not nailed down. Here, at Apollo, since then, it’s no secret we’ve been very active in monetizing the existing investments of the funds we manage, but even I didn’t foresee the remarkable pace of the activity to come…. For now, in terms of harvesting, we intend to remain active in capitalizing on market conditions as appropriate.

This “harvesting” takes place when the smart money sells its investments at peak valuations and at the peak of the market to the dumb money, often mutual funds that get stuffed into the retirement nest eggs of the unwitting.

So this had to happen. With stock markets soaring for five years straight, with home prices jumping in the double digits two years in a row, and with other assets defying gravity each in its own manner, regular folks started doing the math and extending straight lines from these data points decades into the future, and they discovered that they’ll be able to retire once again comfortably. Or more precisely, 50% of them made that discovery, according to Gallup. The highest percentage since 2007, just before all heck broke lose.

This optimism of regular folks is required for the smart money to be able to “harvest” its gains. The mainstream media has been playing along by breathlessly covering the Dow, which set another all-time high on Friday, and the S&P 500 which is just a smidgen off its all-time high. But beneath the surface, stock after stock has been getting slaughtered. It just doesn’t show up in these two indices.

The stocks of the largest corporations have been doing pretty well. Due to their enormous market capitalization, they dominate mathematically the capitalization-weighted indices. And in that capacity, they paper over the systematic, wholesale destruction of smaller stocks, and particularly of the darlings of the last few years.

And extensive. FBN Securities looked at individual stocks to determine how far the average stock in each of the major indices had plunged off their 52-week highs – and “plunge” is beginning to be the right word: 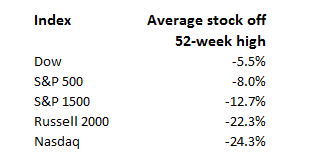 Note that the average stock in the Russell 2000 and in the NASDAQ has dropped into bear-market purgatory. There are about 5,000 stocks in the NASDAQ composite, and the average stock is down 24.3% from its 52-week high. This isn’t a handful of stocks, but thousands that are down in a big way. Only the index’s mastodons with megaton capitalizations cover up the bloodletting beneath them.

Drilling down a little, we get to the fabled momentum stocks, the darlings of the last few years, stocks that were driven to insane heights by Wall-Street hype, industrial-strength smoke and mirrors, blindly adoring buyers, momentum players, and finally retirees in search of the illusory wealth effect (after their life savings had been decimated by the Fed’s ZIRP). And among those stocks, there has been an extraordinary bloodbath.

Twitter’s plight – it’s down 57% from its 52-week high – has been ascribed in the media to its unique circumstances, the expiration of the lockup period, lack of profits, and whatnot. It certainly wouldn’t be indicative of anything else. Alas, these kinds of landmines have been blowing up all over the stock market.

One place to find some of them grouped together is the Cloud Index maintained by VC firm Bessemer Venture Partners. There are 37 publicly traded “cloud” companies in the index. The list below shows the top 23 by market cap, ranging from Salesforce with $31 billion in market cap to LogMeIn with just under $1 billion. 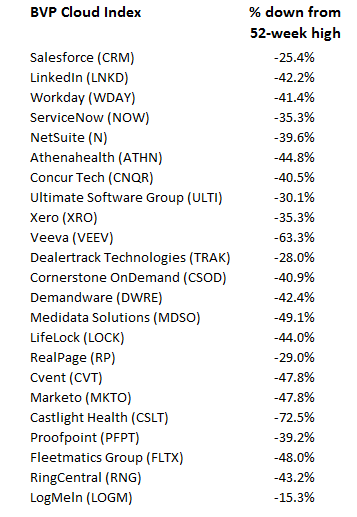 The average decline from their individual 52-week highs is 41.1%. A serious crash.

“After 30+ years in this biz, I’ve never watched an equity market rollover in slow mo,” a deeply worried portfolio manager with one of the world’s major banks told me. “That is, I’ve always been caught up in the excitement, as in 2000 and 2007. But today, there’s little excitement. Just calm confidence, as reflected in the VIX.”

That panic indicator, which measures volatility among S&P 500 stocks, sits tranquilly near its 52-week low, in a state of complete serenity. According to the VIX, stock market investors still think that nothing untoward is going to happen to stocks any time soon.

Only, it is already happening to thousands of stocks! The process is expanding and deepening, drawing evermore stocks into its vortex. But even while the googly-eyed mainstream media celebrate the Dow’s record high and speculate when the S&P 500 might itself set another record, stocks are being gutted one by one beneath these illustrious indices. The carnage is spreading. And nothing in history indicates that this might be a temporary blip, or that these stocks – after a dizzying, rationality-defying five-year bull market – will somehow not drag behind them those stocks that are still managing, by hook or crook, to keep their nose above water.