It has now become gospel that stock markets no longer depend on economic or business fundamentals, that they’ve finally been liberated from all those nagging and inconvenient details that in the past had held them down or smashed them into the ground. The gospel can no longer be denied. Andrew Lapthorne, Head of Quantitative Equity Research at Societe Generale, wrote in his Tuesday report:

Of course fundamentals have taken a backseat to cheap money and central bank largesse for some time now and the US Fed was once again reminding markets yesterday of its dovish tendencies. Weak fundamentals and cheap money provide the perfect recipe to drive ‘hope for growth’ momentum investing. Why worry if the price can only go up.

It shows up in every aspect of the markets. While stocks have soared last year, revenue and earnings growth have been measly. And so far this year, things have gotten tougher. Rather than just soaring, stocks have lumbered and stumbled from one new high to the next. But with earnings season about to kick off, corporate confession time has been in full swing – and there has been a lot of confessing.

So far, of the 111 companies in the S&P 500 that have issued earnings guidance, only 18 have guided above Wall Street’s consensus estimate for the first quarter, according to FactSet. That’s 16%; if that’s the final number, it will be the third-lowest for positive guidance in the data set’s history going back to 2006.

But 93 companies (84%) have issued earnings warnings – the second-highest in FactSet’s data series, and just one notch below the record 85%, the dubious achievement of the fourth quarter 2013.

Companies in the Consumer Discretionary sector got hit the hardest – I’m shocked, shocked, shocked, given America’s effervescent consumers who all have highly paid full-time jobs or something. Industrials were second in line. Both are on track to set a new record in negative EPS guidance. 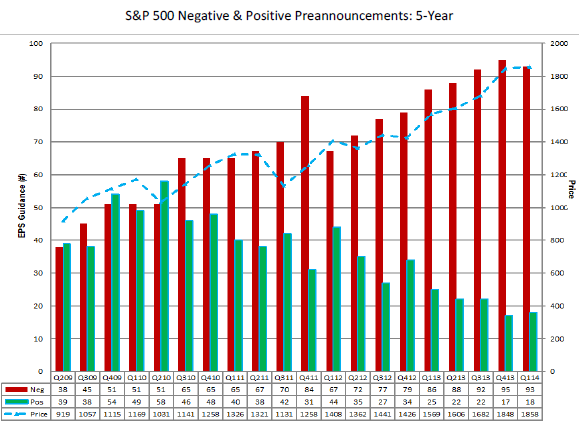 But don’t worry: “hope-for-growth momentum investing” takes care of it.

As expected, the stock market reacted positively to the positive EPS announcements during Q1, well, those few companies that actually had them: the average stock price of the 18 companies that issued positive EPS guidance, as FactSet pointed out, rose 3.6% (measured 2 days before and after) and handily beat the five-year average of 3.0%.

And the losers? Over the last five years on average, stocks of companies with negative earnings preannouncements got whacked nearly 1% over the four-day period. But not during these crazy times of ours. Even when earnings projections were cut, the market reacted positively. The 93 sinners saw their stocks rise 0.2% on average.

Nothing rooted in reality can take down this stock market.

The game is working. Companies have issued record amounts of debt to buy back their own shares. In Q4 2013, buybacks by S&P 500 companies jumped 30.5% year over year to $129.4 billion. Borrowing money to buy back shares is the simplest way to boost EPS.

It’s not an investment in productive capacity, marketing, or expansion projects. It just blows a lot of cash on manipulating the one number that the entire world is focused on. To heck with the rest. And it piles risks and future interest expenses on the balance sheet. Meanwhile, growth in revenues and actual earnings is in the doldrums.

What has been soaring, however, is the “hope for growth.” Every quarter, analysts project dizzying revenue and earnings growth, and even more EPS growth, two or three or four quarters into the future, and they use these metrics of fabricated numbers to justify current stock prices, and every quarter, when realty sets in, they roll their hopes further into the future.

The game isn’t to produce growth in revenues and actual earnings but to create momentum and manipulate the stock price up. So, companies issue earnings warnings that will, during our crazy times, raise stock prices on average, and then they report EPS numbers that exceed these lowered expectations which will raise stock prices again. In the olden days of stock price manipulation, the first would hammer the stock, and the second would goose it. Now both goose it. A two-step way to ever higher stock prices on uninspiring performance.

That liberation of stocks from economic and business realities, and the concurrent official renunciation of gravity and of certain laws of physics, is the Fed’s greatest achievement in its illustrious 100-year history.

And the Fed is right, because everyone believes that everyone believes that the Fed is right. Believing in the same thing creates momentum, and they chase after that momentum which creates even more momentum, and they close their eyes and put their money on it. That part of the bubble isn’t the Fed’s fault. It’s the individual’s decision to do as others are doing to get their slice of the “wealth effect.” It’s consensual hallucination. The Fed merely provides the liquidity, the nearly free money, the encouragement, and the essential common focal point. And it works wonderfully. Until, someday, it suddenly doesn’t.