I’m a coffee lover, and this is getting personal.

Brazil, the top producer of arabica coffee, has gotten hammered by drought. A few analysts have cut their estimates for the 2014/15 crop, with a leery eye on the 2015/16 crop. It’s not a catastrophe for the rest of the world, and there is a pretty good chance we won’t have to switch to drinking hot water.

But it was good enough for traders to nudge coffee futures up a few cents from their multi-year low of just over a buck a pound in November. In January, once the charts gave the go-ahead, traders piled in and went haywire and catapulted coffee futures to today’s high of $2.089 (before it ran out of hot air), having doubled in four months.

To make life miserable for the rest of us coffee lovers. Our latte, espresso, or just plain good coffee is going to bite fiercely into our already mauled pocket book.

And here it is via Signalinea, a weekly chart (doesn’t include today’s moves) going back to 2007. Already the craziest chart of the year, though it’s just March: 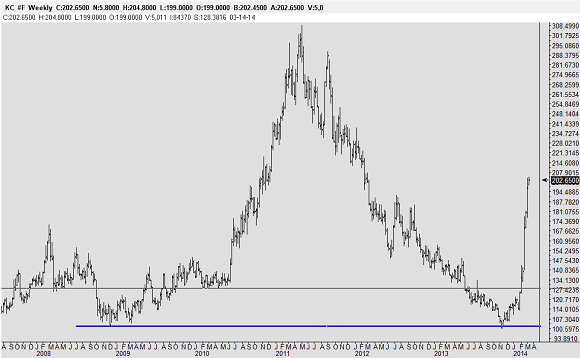 My beloved state of California too has been getting hammered by drought, and we produce 82% of the world’s almonds, our second most valuable legal crop, after grapes, with sales of $4.4 billion in 2012. Production has doubled since 2006 to 1.9 billion pounds last year.

These almond orchards cover endless acres in the Central Valley, much of it in counties whose drought conditions have been labeled “extreme.” January and February, the middle of our rainy season, were mostly dry, after two dry years. There have been some good rains since, but still a drop in the bucket, so to speak. Growers need to irrigate their orchards with water that doesn’t exist this year.

So, in your bag, jar, or can of mixed nuts later this year and next year, watch for the magic disappearance of almonds, to be replaced with cheaper nuts to keep inflation from showing up in its ugly manner on the price sticker. And start counting the almond chips in your almond biscotti.