Washington is tangled up in spirited bouts of mudwrestling over exporting US-produced crude oil, which has been prohibited since the Arab oil embargo of 1973. Oil companies, environmentalists, consumer groups, lobbyists, lawmakers – they’re all at it.

Oil companies, faced with lackadaisical consumption and ballooning production in the US, are desperate. They have visions of dropping prices just when exploration and production costs are rocketing higher. So they want to benefit from the higher prices their US-produced oil would bring in other markets – and they want to create scarcity in the US to fire up local prices.

But environmentalists fear general mayhem if crude oil were allowed to be exported. Consumer groups are worried that it would raise the cost of gasoline, diesel, propane, and heating oil – though oil companies have sworn up and down a million times, via numerous studies they themselves directly or indirectly funded, that oil exports wouldn’t impact prices at the pump. Lobbyists of all stripes see in this conflict a mega-opportunity to fatten up their wallets. And lawmakers want to exact their pound of flesh from both sides; elections are coming, and they need to stuff their campaign coffers with money.

Meanwhile, behind the scenes, so to speak, something else has been happening: a breathtaking boom in exports, not of crude oil, which would be illegal, but of refined “petroleum products,” which is perfectly legal, even if it’s refined just enough to circumnavigate the crude-oil export ban.

BP, the British oil mastodon which is still in hot water over the Horizon oil spill in the Gulf of Mexico, figured it out too. It has inked a 10-year deal for at least 80% of the capacity of a refinery being built by Kinder Morgan Energy Partners LP in Houston, Bloomberg reported. The first phase of the 100,000 barrel-a-day refinery is expected to come online in July. It’s designed to refine crude just enough to turn it into a “petroleum product,” which then can be legally exported without limits.

To heck with the crude oil export ban.

It’s not just BP. The possibility of legally exporting barely refined “petroleum products” to profit from the price differential overseas has been such an irresistible lure that it has triggered a construction boom of specialized refineries along the Gulf Coast.

An “inexpensive way around the export prohibition” is what Judith Dwarkin, chief energy economist for ITG Investment Research, called the phenomenon. She told Bloomberg, “You can lightly ruffle the hydrocarbons and they are considered ‘processed’ and then they aren’t subject to the ban.”

Specialized refineries, built at a fraction of the cost of full-fledged refineries, can distill the lightweight crude or “condensate” found in parts of the US into various “petroleum products” that often need to be refined further in the receiving country. Production of condensate has doubled since 2011, creating glut-like conditions in some areas. Hence the drive for exports. And the drive to finagle a way around the crude-oil export ban.

This chart by the Energy Information Administration shows the “petroleum product” export boom that is making such hilarious mockery of the crude-oil export ban: 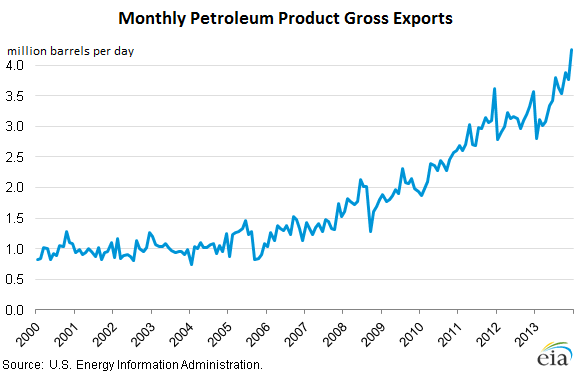 Since 2007, when this boom took off, exports of petroleum products have tripled to a full-year average of 3.5 million barrels per day (bbl/d) in 2013, up 11% from 2012, according to the EIA. And they hit 4.3 million bbl/d in December, the first month ever such exports exceeded the 4 million mark.

Among these petroleum products are “distillates,” the largest category that includes diesel, kerosene, and home heating oil. US refineries increased their production of distillates to an average of 4.7 million bbl/d for the year, and set a new record in December of 5.1 million bbl/d. About 1.1 million bbl/d were exported in 2013, up 10% from prior year, half of it to Central and South America, 400,000 bbl/d to Europe.

Worried about the price of gasoline at the pump? Exports of gasoline (finished gasoline and gasoline blending components) rose 9% to an annual average of 550,000 bbl/d, with December setting a new record of 770,000 bbl/d.

Heating your home with propane? You got snookered this winter. Propane around the country prices nearly doubled since October, though they have started to wind their way back down to earth recently. Meanwhile, propane exports, supported by a new export terminal that came on line in September, soared, particularly in the last quarter, and averaged 300,000 bbl/d in 2013. A 76% jump from prior year!

Whatever the original purpose of the export ban, it wasn’t immensely helpful in keeping prices down – I mean, if I remember right, a gallon of gasoline cost a fraction of a buck at the time. Now the ballooning exports of “petroleum products” and the potential for outsized profits have nurtured along a specialized industry that is piling billions into infrastructure, plant, and equipment, with the sole goal of elegantly dodging the export ban.

What is perhaps the most gigantic loophole in the history of mankind may well obviate that spirited high-dollar mudwrestling show in Washington. Then lawmakers and lobbyists would have to go look for some other cause which they could leverage to exact their pound of flesh. And the industry will continue to use every trick in the book to light a fire under prices – and exporting “petroleum products” is just one of them.