The Nasdaq, our favorite stock index, peaked in March 2000 at just above 5,000 then crashed, losing 78% of its value, with many highflyers simply disappearing into the fog. While it recovered some during the last bubble just before the financial crisis, it didn’t even make it to 3,000. Yet other indices, including the lethargic big-company S&P 500, set new highs. And then the Nasdaq crashed again, despite not having properly recovered in the first place.

Its status as laggard continued. Despite the Fed’s furious money-printing that was designed to inflate asset values, like stocks traded on the Nasdaq, and despite the many trillions other central banks have printed with the same goal, and while the Dow, the S&P 500, and other indices have blown past their prior bubble highs, the Nasdaq still hasn’t reached its high from 14 years ago.

But this is about to change.

A “parabolic overshoot” is about to come, as Michael Hartnett, Chief Investment Strategist of BofA-Merrill called it last week in a report. The fundamentals are in place: the Fed and other central banks are still printing; zero-interest-rate policies are still in effect; tiny pre-IPO companies are obtaining unthinkable valuations; IPOs are flying off the shelf especially if there are no earnings on the horizon; and the all-time favorite Nasdaq components, biotech and internet stocks, are once again sizzling. Yup, the same old sinners in the first Nasdaq bubble are at it again. And this time, it’s going to be … fun!

Take the NASDAQ Biotech Index NBI. It soared 255%, from 450 in February 1999 to 1,600 in February 2000. That jump was for an entire index, not a company whose phase-2 trial happened to have been a screaming success. But it was justified. Biotech was on everyone’s lips. The promises were huge. Earnings were rolling in, at those few companies in the index that had earnings, and the rest of the companies were running on unbeatable hype. The population was getting older and sicker and needier, and so the index would continue to soar for all times to come. Newsletters that dared to proclaim that Biogen or whatever had ballooned into the inexplicable were canceled and had to change their tune to stay alive.

Those were the good times when money grew on trees. As traders, we felt immensely smart because we were harvesting money without doing much of anything other than using our razor-sharp brains and our lousy internet connections.

By July 2002, the index had dropped to 400. All the fun had hissed out of trading, and traders, after having lost much of their money, were out looking for real jobs. 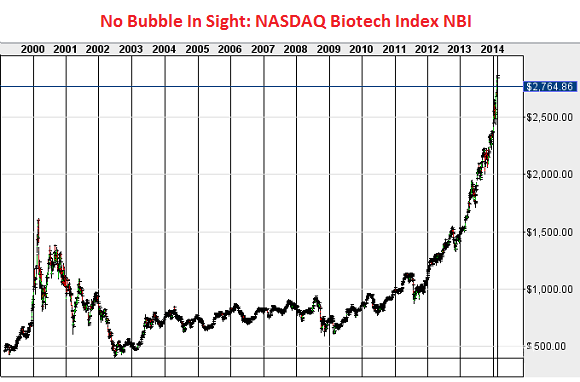 This kind of rip-roaring fun is what we were all waiting for, and the Nasdaq is finally delivering it, sector by sector, just as it did before, and people are already dreaming about that smooth, ultra-cool 10,000. Because we are in the era of “the New Paranormal,” as Hartnett put it in his report. “Paranormal liquidity stimulus” leads to “paranormal activity” to deliver that “parabolic overshoot” in asset prices.

And at the zenith of that parabolic overshoot curve – because every parabolic curve goes into a steep drop-off, and we don’t want to go through this again – we’re all going to bail out at the same time, just like we did from 2000 to 2002 and even more successfully from 2008 to 2009. This time, we’re going to pull the trigger before it sucks us in. But meanwhile, in this episode of mankind when any news is good news for stocks – either as a sign companies will be doing well, or as a sign the Fed will douse the market with more liquidity – we’re going to harvest the money while it’s still growing on trees.

Hartnett warns nevertheless: “Periods of speculative excess are only ended by one thing: monetary tightening.” By which time, the smart money will already be bailing out. Signs of it are popping up. And small investors?

They’re finally having fun in the stock market again, after years of sitting out the most phenomenal rally. They’re leveraging up their portfolios. Margin debt is spiking beautifully. Alas, spiking margin debt has a nasty habit of ending in a crash. In one painful chart. Read….Small Investors Exuberant, Margin Debt And Risk Of Crash Soar