Monday is Janet Yellen’s first day on the job as Chair of the Federal Reserve. So, reality is upon us, and all wishful thinking aside, it’s crucial that we obtain, one way or the other, a clear picture of what her glorious tenure will look like. Merk Investments has whittled all the artificial complexities, convoluted Fed speak, wooden jargon, hidden meanings, forward guidance, and whatever down to that clear picture… 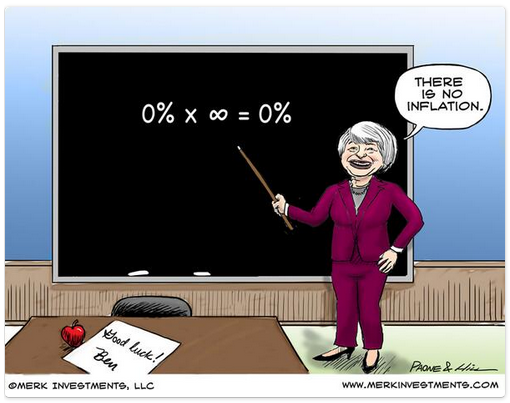 Under Chairman Bernanke, the Fed has accomplished a truly remarkable thing: after the Fed-engineered financial bubble blew up in what we now know as the Financial Crisis, it bailed out all the guilty parties and enriched them immensely – remember the record bonuses the bailed-out Wall Street firms paid their executives in 2009, while they were being bailed out? That was the first major indicator of what the Fed wanted to accomplish.

In the process, it has stolen the livelihood from savers, retirees, and conservative investors by repressing interest rates on CDs and other savings instruments to near zero, and below the rate of inflation. And so the Fed is gradually shuffling the wealth of these hapless folks to Wall Street, which gets their money for free – the greatest wealth-transfer scheme of all times. Thank you halleluiah, Ben.

And many of those conservative investors, savers, and retirees who’d been driven to utter desperation and didn’t want to get mauled by the Fed’s policies, they went where the Fed pushed them to go: way out to the thin end of the already trembling limb, taking on risks that they would never have imagined before, and when that thin end breaks off, and they crash, it will complete the cycle – under Yellen’s watch.

But the bubbles have become magnificent. And they have triggered the same sort of behavior on Wall Street that blew up Wall Street five years ago. Take the new and improved contraption, a synthetic structured security that on its polished surface looks like that triple-A rated mortgage-backed toxic waste that helped blow up the banks and your 401(k) in 2008. But this time, it’s different. It’s even worse. Read…. The Exquisitely Reengineered Frankenstein Housing Monster