By Dan Dicker, Oil & Energy Insider, a premium publication that gives subscribers an information advantage when investing, trading, or doing business in the energy sectors.

The latest IEA report on Crude supplies has got me thinking, a new accomplishment for the IEA; it has been woefully behind the curve on most of the major energy trends of the last two decades.

But this time, it seems to me that the IEA, and its lead economist Fatih Birol, has gotten much right and is finally in front of the curve on the most important trends that we need to keep in the front of our minds if we are to successfully invest in the oil patch.

The first major point made by this latest report was in the ramping production from shale of crude supplies in the United States.  We are not just one of the leading nations in the potential for shale crude production but clearly in the lead in the application of the capital and technology to get that oil out and to market.  The major headline to come from the report which was picked up by all the major news media was the prediction that the US would become the leading producer of crude by 2015.

This was the obvious and predictable headline; of ‘Saudi America’ and the prospect of energy independence — but while that’s an interesting and important trend, what it does for us as investors is marginal.  More important was the secondary point of the IEA report, the part where Birol really shines, recognizing the fast ramp up in production of the oil shale plays, but also predicting the increasing capital required to keep that growth going and the ultimately limited resource base of the shale plays.

In other words, not only is shale oil far more limited a resource than most shale hype would have you believe, but also oil from shale will grow increasingly difficult and expensive to find and produce.

While the limitations of shale oil here in the US are decades away, we have already begun to have indications that the IEA has gotten this trend very right in the Bakken where production growth has just begun to show signs of leveling off, even after only 5+ years of parabolic drilling. 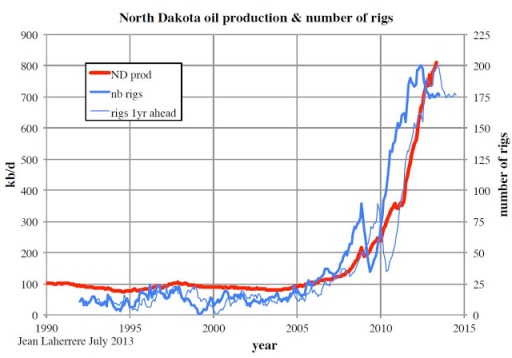 Even in the Bakken, this plateau of production is several years away, but very much affects how we should view our investments in the shale plays — valuations are often determined by a very rapid rate of production growth, an acceleration that cannot possibly be sustained.

As a trader, we need to hold this idea in mind while still being able to suspend reason when it makes sense to do so:  witness the stock example of Pioneer Natural Resources (PXD), which has tripled on Wolfcamp results that even Mark Papa, the outgoing CEO of EOG Resources (EOG) admits likely cannot be sustained. Despite that industry consensus, we still need to benefit from the ramping of these ‘hot’ stocks, which generate smart short and medium term winners that can really boost our returns.  A very simple stop on the downside protects us from the ‘end of the honeymoon’ effects of a plateau in production.

The last moving variable that the IEA report doesn’t begin to address is commodity price, something I’m well aware of as a lifetime oil trader.  Each shale play as it emerges also delivers a cost per barrel in both the overall play as well as the specific and more active sections inside of the play.  The likely future market price for oil will dictate the viability and the profitability of each section, sharply defining the value of the companies engaged there.

And that’s the subject of my next column, equally important as the dynamic nature of the shale plays were covering — what’s the outlook for the price of crude and which companies are likely to benefit the most? By Dan Dicker, Oil & Energy Insider, a premium publication that gives subscribers an information advantage when investing, trading, or doing business in the energy sectors.