We’ve known it all along, but now a former Fed insider confirmed it. In his “confession” in the Wall Street Journal, he admits that the Fed’s money-printing binge, despite relentless efforts “to spin QE as a tool for helping Main Street,” was in reality “the greatest backdoor Wall Street bailout of all time.” Finally! But it’s complicated, as they say. He’s a revolving-door Wall-Street banker.

The author, Andrew Huszar, a lawyer by training, started his career at the New York Fed where he worked for seven years, ending up in the Bank Supervision Group, assessing financial risk exposures of large banks during the years leading up to the financial crisis. In 2008, he quit – “out of frustration, having witnessed the institution deferring more and more to Wall Street,” he wrote. “Independence is at the heart of any central bank’s credibility, and I had come to believe that the Fed’s independence was eroding.”

Which is disingenuous. The Fed, when it was designed 100 years ago, was supposed to be independent from democratic forces, not Wall Street. It was designed to serve the banks.

So frustrated was he with the whole pernicious setup that he quit and became a hermit jumped to RBS Greenwich Capital, the US investment bank of bailed-out Royal Bank of Scotland, and became Senior VP and co-head of the Transaction Advisory Group.

In the spring of 2009, as the New York Fed was losing itself in a drunken bond-buying stupor, the revolving door whirred again, and he slipped through it, this time to manage the intricacies of QE1, though no one called it QE1 back then, as no one thought that there’d ever be another one. It was “a wild attempt to buy $1.25 trillion in mortgage bonds in 12 months,” he explained. “We were working feverishly to preserve the impression that the Fed knew what it was doing.”

But his “old doubts” percolated up again. “Despite the Fed’s rhetoric,” the program wasn’t doing anything for the Main Street economy. Banks were lending less and less. And the moolah the Fed handed them for free? Well, “more insidiously,” surprise, surprise, “Wall Street was pocketing most of the extra cash.”

He and “several other Fed managers” started “voicing the concern that QE wasn’t working as planned,” but the warnings “fell on deaf ears.” Instead of worrying about the cost of QE versus its benefits, “the only obsession seemed to be with the newest survey of financial-market expectations or the latest in-person feedback from Wall Street’s leading bankers and hedge-fund managers.”

I mean, come on. That’s who the Fed works for. Who else should they get in-person feedback from?

Look at Vice Chairman Janet Yellen. As rumors floated around that she’d be nominated to chair the outfit, she started to meet with Wall Street CEOs and others, as Bloomberg found out: Wells Fargo’s John Stumpf on April 3, JPMorgan’s Jamie Dimon on April 10, Morgan Stanley’s James Gorman on April 15, Goldman’s Lloyd Blankfein on June 7…. She knows who she’ll be working for.

So when QE1 ended on March 31, 2010, Mr. Huszar found that there’d been “only trivial relief for Main Street,” but it had been an absolute coup for Wall Street:

The banks hadn’t just benefited from the lower cost of making loans. They’d also enjoyed huge capital gains on the rising values of their securities holdings and fat commissions from brokering most of the Fed’s QE transactions. Wall Street had experienced its most profitable year ever in 2009, and 2010 was starting off in much the same way.

But stocks plunged 14%, and banks started to wobble, and Wall Street was screaming for more free money. That’s when QE became QE1: the Fed started another money-printing binge.

“That was when I realized the Fed had lost any remaining ability to think independently from Wall Street,” he wrote, again confusing the issues since the Fed was supposed to be independent only from the riffraff and their democratic ways, not the bankers. Record bonuses for Wall Street. And Main Street?

Small businesses are an indication of how magnificently Main Street has fared under the Fed’s infinite wisdom. The long-term chart of the small-business optimism index, which the National Federation of Independent Business released today (it dropped to 91.6 in October), gives a whiff of Main Street reality. And it’s not pretty. 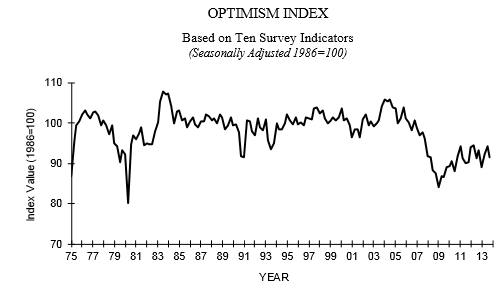 From 2003 on, small businesses began to lose optimism. By 2008, it had already dropped a lot. Then Treasury Secretary Hank Paulson walked into Congress with an ultimatum. The former Goldman Chairman and CEO had a big part of his wealth tied up (indirectly) in Goldman stock, which was plunging into a bottomless sinkhole and needed to get bailed out. So he told Congress that the world would end, his world that is, unless Congress gave him unlimited powers to bail out Goldman and the rest of Wall Street. Congress, after saying no, partially gave in to his extortion and created the very limited TARP. But the Fed was already bailing out Goldman et al. with trillions of dollars.

Main Street and small businesses weren’t even on the radar! For small business optimism, that whole insanity was the last leg down. And the bounce since? Those little squiggles on the right side of the chart.

Even worse is the Small Business Outlook index. The thick line, the percent of business owners who thought it was a “good time to expand,” fell to 6% in October. By comparison, the year 2008 began at 9% and 2009 ended at 7%. That’s how much the Fed has accomplished on Main Street since the financial crisis: nothing! 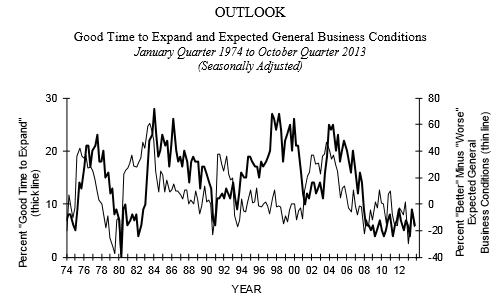 “Demoralized, I returned to the private sector,” Huszar wrote. So Main Street? Nope. Wall Street. He became a Managing Director at Morgan Stanley, which had been bailed out by the New York Fed. And as Primary Dealer, the bank benefitted directly from QE, making money off the bonds it was selling to Mr. Huszar and his people at the New York Fed.

So, while Main Street struggled, Wall Street “racked up hundreds of billions of dollars in opaque Fed subsidies,” he wrote. “The biggest ones have only become more of a cartel: 0.2% of them now control more than 70% of the US bank assets.”

He left Morgan Stanly in June last year and became senior fellow at Rutgers Business School. Perhaps he will no longer slip through the whirring revolving door between the Fed and Wall Street. Or perhaps his stint in academia is just a temporary resting place. But his bout of belated honesty and regrets, if that’s what it is, combined with his tightly woven connections to Wall Street and the Fed, peppered with his disingenuous display of frustration over the Fed’s lack of independence from banks show just how insidious the whole system really is – and how it has compromised the people who rotate through it.