The euro, its dexterous management by Eurocratic institutions, the “whatever-it-takes” guarantees by ECB President Mario Draghi, the brilliant near-zero-interest-rate policies that are demolishing savers, the trillions being shifted around to prop up banks and governments alike – all these efforts to keep the Eurozone duct-taped together have impacted countries differently. Including France and Germany. Now they’re shooting at each other, though they’re trying to hit the European Central Bank.

France launched a direct attack. The Bundesbank was more subtle. Often a breath of fresh air in the drunken money-printing frenzy of central banks, it elevated Germany’s housing price inflation to its top worries in its Monthly Report for October. To give it utmost prominence, the Bundesbank also published the section separately for all to see, and to drive home the point just how important this was, it published a shorter version, so that no one would have to dig through every morsel in the 140-page full report.

Home prices in the largest German metro areas have soared since 2010, to the point where they’re now “overvalued.” This overvaluation was spreading beyond the big cities. Prices that have jumped “by over a quarter” since 2010 are “fundamentally hard to justify,” the Bundesbank warned. And “fears” are cropping up of a “property price boom.” 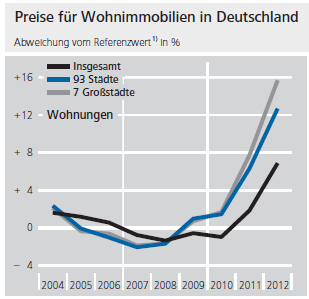 Based on the results of its study, the Bundesbank warned that prices in those top urban areas may now exceed fundamental values by 20%.

“After the real-estate bubbles in the US and in several European markets burst, the German housing market, which had been quiet for years, became more attractive to international investors,” the report explained. Property investments have gained popularity due to the near-zero yields that are dogging any halfway decent investments. Spooked by the “financial and sovereign debt crisis,” international investors have been pouring in. Thus the Bundesbank confirmed in its bland manner the anecdotes about loaded and desperate Greeks and Spaniards descending on Berlin, Munich, and other cities to bid up prices of apartments and keep their money out of the sun – and out of the banks.

The fact that the Bundesbank promoted this section so prominently was a warning shot aimed at the increasingly numerous Eurozone countries that are clamoring for a major devaluation of the euro. France has been the ringleader of that palace revolt. The ECB’s loosey-goosey monetary policy was causing a real-estate bubble in Germany, the warning said. The bubble would have to be reined in, and a tighter monetary policy would certainly help. But for crying out loud, at least don’t loosen it any further!

It fell on deaf ears across the Rhine, where Industry Minister Arnaud Montebourg, chief proponent and popularizer of the “le made in France” – or “economic patriotism,” as he called it – was begging for, or demanding, I’m not exactly sure which, a 20% devaluation of the euro.

The occasion was a Q&A session organized by the daily, Le Parisien, where several “readers” asked him questions on a variety of hot-button topics, including France’s employment fiasco, the twisted fate of automaker PSA Peugeot Citroën which the French government and Chinese automaker Dongfeng are thinking about bailing out – “the company will remain in France and French,” he said – and the euro.

He’d been hit with an explosive question: “The French are disgusted…. Your failure is enormous: on taxation, factories that close, people who’re crying with a loan on their back. How can you bring them back to you?”

“With results, not words,” Mr. Montebourg said as a warm-up. “This also implies that our European partners” – code for Germany – “understand that opting for recession can’t continue. Europe is the only region in the world, five years after the financial crisis, that hasn’t returned to growth,” he said. But he had a solution.

He didn’t mention the even more potent solution: If the euro dropped 30%…. Or 40%. By the time it loses 95% of its value, an accomplishment that took the Fed 100 years, all of France’s economic problems would be solved.

“We demand that the European Central Bank do what all other governments do: adjust rates according to our interests. The euro is too expensive, too strong, and a bit too German. It should be a bit more Italian, French, and basically more European,” he said.

Devaluations are always effective solutions. Italy devalued the lira in 1990 and again in 1992. Look how well Italy is doing. And France, after a series of devaluations since 1945, “revalued” the franc in 1960 at 100 old francs to 1 new franc. Then the dance started all over again: From 1960 through 1999, when the franc was replaced by the euro, it lost another 88% of its value.

A scourge Germans had mostly been spared. But the French government remembers those times fondly and wants to return to them. So it’s “raising its voice vis-à-vis Brussels,” Mr. Montebourg said, to “express a certain irritation, if not impatience” with this semi-hard currency.

But even as he tried to shove the ECB into a currency war and bamboozle the Bundesbank to condone it, the Fed, currency manipulator extraordinaire, continued to win it, and the dollar swooned against the euro before his very eyes, while the Bank of Japan was furiously trying to keep up.