By Lee Adler, The Wall Street Examiner. The following is an excerpt from this week’s Fed Report. Subcribers may click here to download complete report in pdf format (Professional Edition Subscribers) including 36 pages of charts and clear, cutting edge analysis that you can use to gain an edge in the market.

One of the purposes of ZIRP was ostensibly so that banks could rebuild their balance sheets through suppressed funding costs allowing them to earn a wider spread and increased profits. Theoretically that would add to their capital.

But in this chart we see that over the past month the growth rate of bank capital has fallen to zero. Either banks aren’t really making the profits they are reporting or they are paying out 100% of them in dividends and share buybacks from executives who had received the shares in stock option grants. This is looting, pure and simple. When no bank executives are held responsible and punished for causing the endemic wave of control fraud that caused the crash, the looting of the system will just go on and on. Worse than that, it’s a virtual financial rape of the savers who should be getting that income.

The Fed’s H8 weekly statement on the aggregate balance sheet of US commercial banks reflects the trend of bank capital via the Residual line item, which is the difference between assets and liabilities. The growth rate of bank capital has been trending down since 2007 in spite of a zero cost of funds, which is supposed to boost profits. Obviously, it’s not working. 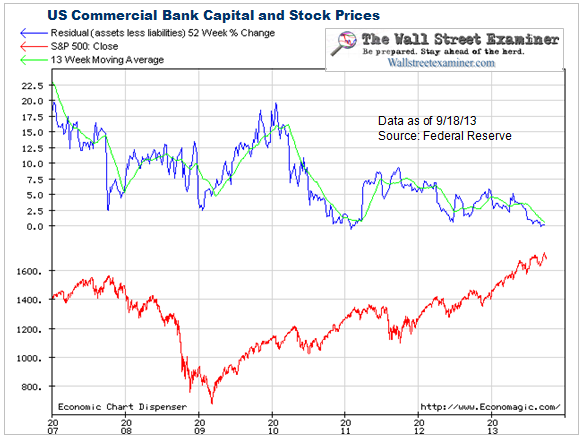 While the Fed has been cashing out the banks week after week, month after month; while they have access to limitless amounts of free cash; while their balance sheets continue to expand exponentially, the US commercial banksters have not added one red cent to bank equity over the past year. They continue to bleed the system while the Fed and the US Government stand idly by allowing, promoting, and subsidizing this legalized but morally criminal skimming of the system.

Wolf here. Lee goes on to point out who got looted in the process: savers – “your grandmother” who lost the income from her life savings as interest rates dropped to near zero, and so she had to eat into their principal balances. They’re among the many victims of the Fed’s policies. Lee has harsh words to describe the scam that these “banksters” and the Fed have been perpetrating for years. To find out what it takes to sign up for Lee’s Professional Edition, go to The Wall Street Examiner.