Japanese banks, which should know a thing or two about banking crises, have once again clawed their way to the top of the heap of overseas lenders. And with their knack for impeccable timing, they’ve once again become the largest force in emerging market economies – just as financial turmoil there is coming to a boil.

The Bank of Japan, under the new religion of Abenomics, has embarked on a dizzying money-printing and bond buying program to devalue the yen (partially accomplished) and to get banks to sell their hoards of JGBs to the BOJ and then lend the proceeds to Japanese businesses so that they’d invest in productive assets so that the economy could start producing more and pick up momentum. However, with businesses in no mood to invest at home, there is little demand for loans in Japan.

There is demand overseas, however. Japanese banks are falling all over each other to lend to these businesses, including Japanese companies that are offshoring production. Focal point: emerging markets, where cross-border lending in the first quarter reached its highest level on record, according to the Bank for International Settlements’ Quarterly Review, released on Sunday. Largest recipient countries: China, Brazil, and Russia.

Yen lending jumped 4.3%, or $55 billion, for the January-March quarter, the first Abenomics quarter. Nearly half of the $114 billion booked for the entire 12-month period! The pace of overseas lending has turned outright frenetic. It shows up in a myriad ways. For example, an August survey by the state-owned Development Bank of Japan showed that Japanese companies were planning to boost their investments overseas by 26% this fiscal year.

But the first quarter belonged to the halcyon days in the emerging markets, before the current turmoil tore up much of the rosy scenery. And banks in general stepped up their activities there, and total cross-border loans to these countries soared by $267 billion, or 8.4%. A tsunami of money (which is now receding).

It’s not like Japanese banks haven’t been there before. During the bubble in the late 1980s, Japanese banks dethroned US banks as the number one overseas lender – including to the emerging markets. In 1989, their share of cross-border lending peaked at 39%. They had their reasons – including, as the BIS explains, a desire “to avoid regulatory restrictions at home.”

But then came the inevitable banking crisis that turned these unconquerable powerhouses, for which no loan was too large and no asset too overpriced, into the infamous “zombie banks” of the 1990s. With a mountain of loans decomposing in their basements, they focused on survival and dealing with the onset of deregulation. Waves of consolidations followed that turned 20 big “city banks” into three megabanks – Mitsubishi UFJ Financial Group, Mizuho Financial Group, and Sumitomo Mitsui Financial Group – that are now, thank God, too big to fail.

The BIS graph shows the implosion of their cross-border lending bubble by Japanese banks. It bottomed out in 2007, at the cusp of the financial crisis, at an 8% share. Then Japanese banks began once again to expand their overseas lending activities. Now they’re number one again, though at a much lower share. 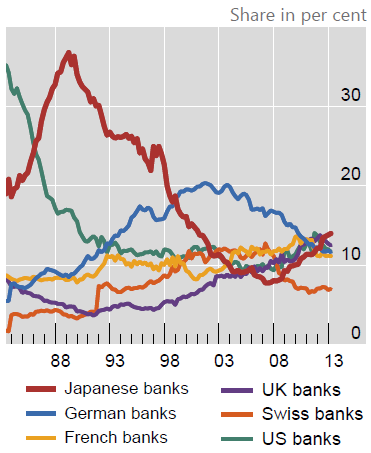 There is a darker side

By the first quarter of 2013, cross-border loans by Japanese banks (by the three megabanks, that is) had increased to $4 trillion. But their cross-border funding amounted to only $2 trillion, mostly raised from non-banks, according to the BIS. The remaining $2 trillion were funded within Japan.

Thus, Japanese banks were deploying overseas their huge deposit base that had been painstakingly squirreled away by Japanese savers to live off during their long retirement years. Investing these $2 trillion overseas over the years to fund corporate expansion projects, acquisitions, and other operations, such as offshoring production to emerging market economies or even the US, was a boon for the economies of those countries. But it didn’t help the Japanese economy. Not one bit. Though $2 trillion would have been a lot of money in Japan’s $4.6 trillion economy.

Now, these Japanese megabanks have redoubled their efforts to lend overseas, funded by a new source, also at home. Upon urging from the Bank of Japan, as part of Abenomics, they are selling their vast holdings of JGBs to the Bank of Japan – $242 billion in the last quarter alone. And these funds too are largely flowing to destinations overseas.

But it has been good for these megabanks. They’re the prime beneficiaries of Abenomics. Lending rebounded. They wrote up stock holdings and extracted fees from frenzied trading. Profits surged. But smaller banks stuck in the real economy of Japan are not so lucky. Read… “We Don’t Feel Any Impact Of Abenomics Here”