So we’re led to believe that 169,000 jobs were created in August: a skimpy 152,000 in the private sector and a lush 17,000 in the public sector, the most since last September, according to the Bureau of Labor Statistics. It was within range of the 12-month average of 184,000. Good enough for the Fed to use as a pretext to ink “Taper” on the calendar for later this year. A pretext because, well….

In reality, the margin of sampling error in these surveys is huge: ± 90,000, the BLS points out. And these results, though presented as high-impact data that move markets if off by a few clicks from what was “expected” (this time 173,000), are just very rough guesstimates. How rough? The gains reported for July were slashed from 162,000 to 104,000 and for June from 188,000 to 172,000. Both within their margin of error. But ugly nevertheless.

The number of people with jobs actually dropped by 115K from July to 144.17 million on a seasonally adjusted basis (and even more on an unadjusted basis). But over half a million people were deemed to have just dropped out of the labor force, and thus were no longer counted as “unemployed,” though they still didn’t have a job. Abracadabra, the number of “unemployed” dropped by 198K to 11.316 million. And the unemployment rate, by the miracles of statistics, inched down to 7.3%.

The New-Normal Mix of the Good, the Bad, and the Ugly

Many of those 169,000 jobs created in August were in low-wage industries: Retail, sadly the number one job creator in America, added 44K jobs; wholesale 8.4K; leisure and hospitality (sandwich chefs, hotel housekeeping staff, etc.) 27K. They make up over 52% of all private-sector jobs created.

Industries with higher wages didn’t do so well: Construction added zero jobs; mining and logging added only 4K – of which 1.4K in oil and gas extraction. Financial activities cut headcount by 5K; within that total, “Monetary authorities, central bank” axed 100 people. The Fed? No way! That had to be a statistical fluke.

Manufacturing, which is experiencing a dizzying “renaissance,” added a measly 14K jobs. But wait…. The auto industry, which is booming, created 19K jobs in August, after having cut its workforce by 10K in July due to layoffs associated with model changeovers. Meanwhile, the rest of US manufacturing slashed employment by 5K.

On the positive side of the ledger, workers who hold part-time jobs because their hours had been cut or because they couldn’t find a full-time job dropped by 334K from the debacle in July to 7.9 million. And the broader U-6 unemployment rate, which includes these part-timers and also the discouraged unemployed who did look for job, fell to 13.7% from 14.0% in July.

Closest Thing to the Truth

So the Labor Participation rate continued on its long-term downward trend and slipped two notches to 63.2%, the lowest since 1978. The Iranian hostage crisis? Yup, that long ago.

And the broadest and perhaps most accurate measure of reality that the BLS offers, the Employment-Population Ratio – the number of working people as percent of the total working-age population – dropped again!

After peaking at 64.7% in April 2000, the era of “full employment,” it zigzagged down only to crash during the Financial Crisis. It’s now at 58.6%, down a notch from July, levels not seen since the early 1980s. It shows that jobs have been created over the last few years, but barely enough to keep up with the growth of the working-age population. But in August, it didn’t even do that. 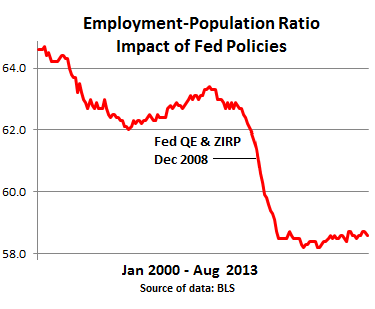 As the graph shows, the Fed’s money-printing mania and zero-interest-rate-policy that it has inflicted on the country since late 2008 have had at best no beneficial impact on jobs. However, they bailed out banks and large corporations, inflated bubbles – some of them now blowing up – and doused those involved with mega-riches.

Pretext for the Taper

When the Fed said it wanted to hand more money to its cronies – currently $85 billion a month – in order to create jobs, it was this graph that came to mind. And when it now says that it wants to taper that process because it already created enough jobs, then it’s also this graph that comes to mind. Job creation and economic growth are just pretexts.

The real reason for the Taper? Fear that the bubbles the Fed has inflated will blow up, as bubbles always do, and take down the financial system, again! Wall Street would require another bailout, which would be embarrassing. So this time, the Fed might try to taper its destructive policies before they blow up the system. And yet, the very act of tapering might blow up the system too. Rarely has an institution with the enormous resources of the Fed painted itself so elegantly into such a beautiful corner.