The new salvation religion being preached in Japan to a hardened and cynical bunch who’ve lived through one of the worst bubbles and busts in recent history is this: prodigious money-printing by the Bank of Japan would devalue the yen, among other things, causing exports to skyrocket and imports to shrink. The resulting trade surplus would save Japan. But the opposite is happening – and it’s happening fast!

So there was a thimble of good news: exports jumped 12.2% in July from a year ago, the Ministry of Finance reported on Monday. Alas, they were valued in weakened yen. In terms of volume, exports rose only 1.8%. So, Abenomics has accomplished almost nothing in terms of cranking up the real economy via exports.

Japan is venturing into new territory. July was the worst July ever. June was the worst June ever, May the worst May ever…. The deterioration has been steep and unrelenting. There hasn’t even been a statistical squiggle yet. And nothing suggests that there is a turning point near the horizon. Just ominous clouds. 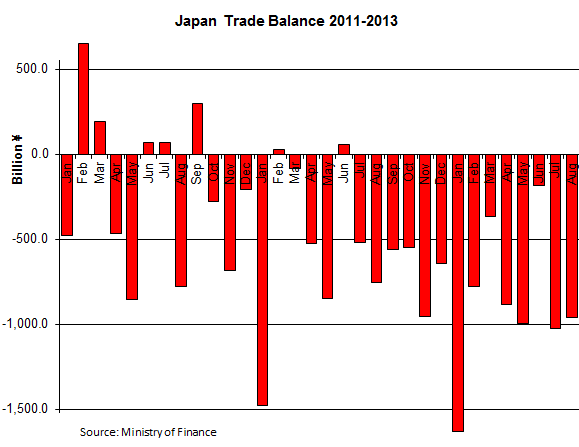 Trade with China is notoriously murky. Over a third of Japan’s exports to China are transshipped through Hong Kong, while imports from China are not. So we have to add China and Hong Kong together. Combined exports rose 11.4% to ¥1.414 trillion, but combined imports jumped 18.5% to ¥1.499 trillion, for a trade deficit of ¥85.8 billion.

It has nothing to do with oil and LNG, or the heat wave, but with Japan Inc.’s strategy to outsource production to China. Wages are cheaper, sure, but they’re rising. No, the primary reason is to be closer to customers in the largest market on earth. And devaluing the yen won’t change that equation.

In Western Europe, the opposite happened. Exports jumped 14.4% to ¥585 billion, but imports jumped 15.1% to ¥736, and the trade deficit widened 17%. Blame imports of French and Italian luxury goods and German cars to satisfy the tony tastes of the beneficiaries of Abenomics and the recipients of the newly printed yen.

The import debacle unfolding in Japan has been ascribed to fossil fuel imports, following the shutdown of Japan’s nuclear power plants. So, imports of Mineral Fuels jumped 20.7% in July. Petroleum, the largest subcategory, soared 30.2% to ¥1.09 trillion and LNG rose 16.9% to ¥621 billion. A heat wave buried Japan under a layer of insufferable swelter; air conditioners were cranked up, and powerplants burned through the fuels at record pace.

There wasn’t a scintilla of good news on the import side of the ledger. It’s a tabulation of the deindustrialization of Japan. It has been going on for years, but slowly. The earthquake in 2011 pushed Japan Inc., and now Abenomics incentivizes Japan Inc., to move production overseas – and then import the products.

When Japanese companies produce overseas, their revenues and profits from that production are translated into yen on their financial reports. A weaker yen means that sales and profits from overseas have a phenomenal impact on the bottom line. On paper. Some of the most illustrious members of Japan Inc. have seen their profits double – without much actual improvement in their business. That’s where Abenomics is excellent: paper profits for Japan Inc. For the rest, it’s a religion that requires a huge leap of faith.

You don’t seem to “think Abenomics is working,” a reader wrote, followed by tough questions and a comparison to Kyle Bass, who has been betting on a “full-blown Japan crisis.” It got me thinking. I’m attached to Japan. What started in 1996 has turned into a complex relationship. But now that Abenomics is the religion of salvation, I’m even more worried. Read…. Why I’m Deeply Worried About Japan – And Why Betting On The Collapse Of JGBs Is A Horrible Idea.