Americans under fifty are paying the price. We don’t know exactly why. Even the panel of experts that authored the massive report, U.S. Health in International Perspective: Shorter Lives, Poorer Health, admits that it can’t entirely pinpoint the reasons. But we do know how Americans under fifty, particularly males, are paying the price: with their lives.

The US health disadvantage, as the report calls it, is more prevalent among “socioeconomically disadvantaged groups.” But even if you’re “white, insured, college-educated, or in upper-income groups” and live a healthy lifestyle, you’re less likely to make it to 50 than your counterparts in the other 16 wealthy “peer” countries of the study—Australia, Austria, Canada, Denmark, Finland, France, Germany, Italy, Japan, Norway, Portugal, Spain, Sweden, Switzerland, the Netherlands, the UK, and the US. And if you do make it to 50, you’re going to get there in worse shape.

“Deaths from Communicable, Maternal, Perinatal, Nutritional Conditions” is divided into dozens of categories and subcategories, and every country has its own nightmare. In Portugal for example, 7.4 people per 100,000 die of HIV/AIDS, more than double the rate of the country next in line, the US (3.4), and 246 times the rate of Japan (0.03).

Do the Japanese cover up their deaths from that scourge by declaring a different cause of death, such as pneumonia? Or is their reliance on condoms for birth control responsible for that immense success, at least in the hetero community?

Overall, Finland has the lowest rate of “Deaths from Communicable, Maternal, Perinatal, Nutritional Conditions,” with 11.1 deaths per 100,000 people. On the other end of the spectrum: the US (33.7), the UK (36.1), Japan (40), and Portugal (45.5). So the chance of dying from these diseases in the US is three times higher than in Finland; but in Portugal, it’s four times higher.

Non-communicable diseases are the biggest killers. And easy answers remain elusive. For example, melanoma and other skin cancers kill 5.8 Australian per 100,000, the worst in the group. So we speculate about the ozone hole, the brutal sun, and people spending time on the beach. In Japan, the death rate is 0.47, by far the lowest in the group. So we speculate about people wearing gloves, hats, and protective garments every time they step outside. But then Norway has the second highest rate of deaths (4.7), followed by other northern countries, Sweden, Denmark, and the Netherlands. The US (2.8) is in the middle of the pack. And sunny Italy (2.0) and Spain (1.8) are outdone only by Japan.

In another conundrum, Alzheimer and other dementias kill Finns at the highest rate (34.9) followed by Americans (24.8)—both countries with relatively low life expectancies. At the bottom, Germans (5.9), Austrians (4.4), and the people who live longer than just about anyone else, the Japanese (2.5).

So, life expectancy for Americans is ugly: 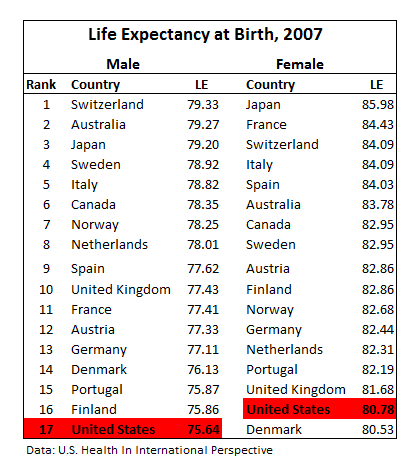 “Something fundamental is going wrong,” lamented Dr. Steven Woolf, who chaired the panel. “This is not the product of a particular administration or political party. Something at the core is causing the U.S. to slip behind these other high-income countries. And it’s getting worse.”

The panel tried to nail down the culprits: a health-care system that leaves millions of people uninsured, the highest rate of poverty, education, eating habits, socioeconomic and behavioral differences, cities built for cars not pedestrians…. But it determined that these reasons cannot adequately explain the differences—because even wealthy, educated, insured whites with healthy lifestyles are getting the short end of the stick.

And worse: high infant mortality, traffic accidents, violence, HIV and AIDS, and alcohol-related mortality hit younger age groups the hardest—leaving them with a lower probability of surviving to age 50 than their peers in wealthy countries. And the lucky ones who do reach 50 get there “in poorer health than their counterparts.”

All this despite the costliest of all healthcare systems that eats up 18% of GDP.