Forecasting the price of natural gas is easy. The US Energy Information Agency (EIA) does it regularly, and like all seasoned forecasters, it produces a slightly wobbly line that is trending either slightly higher or slightly lower. The graph below shows what this exercise looks like. Given that the dip before the dotted line was the April low of $1.90 per million Btu (MMBtu) at the Henry Hub, a decade low, the slight upward trend seems reasonable. 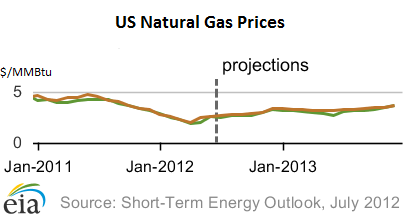 So, we expect smooth sailing, with gently rising prices as is appropriate for the relaxing calm that reigns in the natural gas market. Alas, reality is a series of violent ups and down with sporadic and vicious spikes. 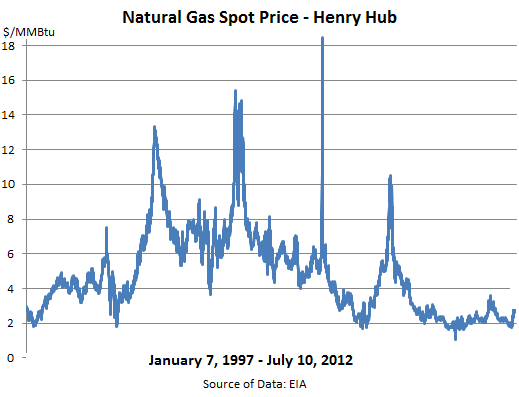 Natural gas prices in the US have been so low for so long that producers are running into trouble. While up 46% from the April low, the recent price of $2.79/MMBtu at the Henry Hub is still too low to drill economically. Losses out into the horizon. Plunging drilling activity. Rig count down 41% from last July, at the lowest level since August 1999. A nightmare for producers. And some will go out of business.

Japan has always paid the highest price (the “Japanese price,” as a sales lady in a museum shop in Korea once whispered to me as she slashed the price of an item I was ogling). But even that Japanese price jumped following the earthquake last year, when Japan shut down its nuclear power plants one by one. By May none were operating … though the first one is now back on line. The hole—nearly 30% of Japan’s power generation—had to be filled. Conservation covered part of it. Switching to natural gas filled the rest. But it drove up demand that whipped prices into a froth at over $17/MMBtu. In Europe, LNG prices have hovered at almost $10/MMBtu, except for earlier this year, when they spiked to, well, Japanese levels.

Japan pays almost 7 times the price that gas trades for at the Henry Hub—because the Henry Hub is irrelevant. US natural gas is landlocked. Even in the US, there are distribution bottlenecks and demand variations that can produce violent local price spikes. Early January, while gas traded for around $3/MMBtu at the Henry Hub, New York experienced a spike and paid nearly $12/MMBtu! In March, as natural gas was drifting towards its decade low at the Henry Hub, Boston briefly paid nearly $9/MMBtu. Natural gas got massacred in one place and spiked in another! 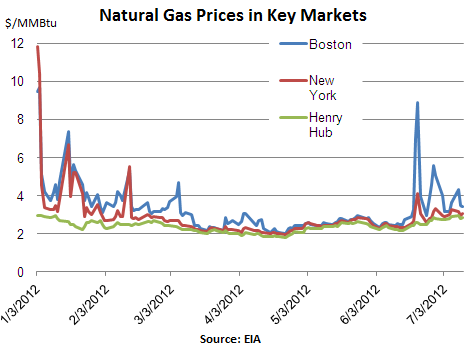 But the US natural gas market isn’t totally landlocked. The US could import LNG from around the world, and it did when prices were higher, but that has ground to a halt, and LNG import terminals are used for storage. The US does import natural gas from Canada via pipeline, but on a declining trajectory.

And the US exports natural gas. Just not LNG. There are no active LNG export terminals in the US, though given the phenomenal price differentials, nine are planned. One of them, the Sabine Pass facility, has already received DOE authorization to export domestically produced LNG. Exports by pipeline to Canada and Mexico have been growing, but are still less than 7% of US production. That the US imports more than that from Canada may sound contradictory, but remember the New York and Boston price spikes: natural gas is local. 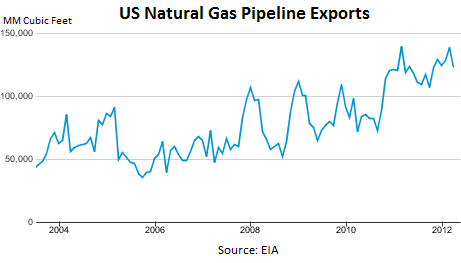 So, near term, exports won’t have much impact on the price of natural gas. But US production appears to have peaked, finally, or maybe, after a historic supply-and-demand mismatch that forced prices into the basement of maximum pain. On a weekly basis, according to the EIA, production is still between 3% and 4% higher than the same week last year. However, given the collapse in drilling, production will eventually taper off, and might do so suddenly. Yet, demand from power generators has been skyrocketing as they’ve switched from coal to gas; and on a weekly basis, overall demand has jumped by over 10% when compared to the same week last year—and it’s burning up the record amount of gas in storage.

And the EIA forecast of a slight upward drift in price? Compared to the reality graph beneath it? Natural gas doesn’t correct to a sustainable price to maintain it. It’s an industry of violent spikes and horrific descents, precisely because transportation is an issue. Oversupply can’t be corrected by exporting; it causes prices to plunge. And a shortage—a scenario the US may be facing at current trends—will be corrected initially by importing LNG in competition with the rest of the world. So prices may spike once again.