No question about it. China definitely takes the cake when it comes to bubble creation. The government encouraged everyday people to speculate in stocks in late 2014 and 2015 to help offset the slowdown in its gargantuan real estate bubble. The stock market bubbled 160% in one year and then crashed 50% (and you can be sure there’ll be more losses to come after a year of propping up a market that has merely gone sideways…)

Then to cushion that 2015 stock crash, the government made loans easier for real estate again. Bank loans surged by 7.5 trillion renminbi (RMB) in 2015 and are on track to surpass 15 trillion RMB by the end of this year. About half of these loans are in mortgages.

After flattening for three years, real estate prices went totally bananas again. They’re up 59% in the hottest large city, Shenzhen, since February 2015. They’re up 35% in Shanghai.

Shenzhen is the large industrial city outside of Hong Kong and it is now the next bubble city. Property prices there have surpassed Shanghai and Beijing prices for the first time.

But there are a number of Tier 2 cities that are bubbling even faster. Seven major cities have seen more than 50% growth in the square footage sold in the last year. These include:

Chinese billionaire Wang Jianlin calls it “the biggest bubble in history.” And the richest man in China, with a net worth of more than $30 billion, has been selling all of his real estate as fast as he can since early 2014. That’s what you call “the smart money!” Just like Baron Rothschild, selling a bit earlier rather than later is always prudent because bubbles tend to crash twice as fast as they build and real estate gets illiquid the fastest.

A Bubble Looking for a Pin

For more evidence of how bubbly China’s real estate is, look at this next chart from HSBC. It shows the total value of residential housing as a multiple of GDP, as is possibly the best measure of the situation over there. 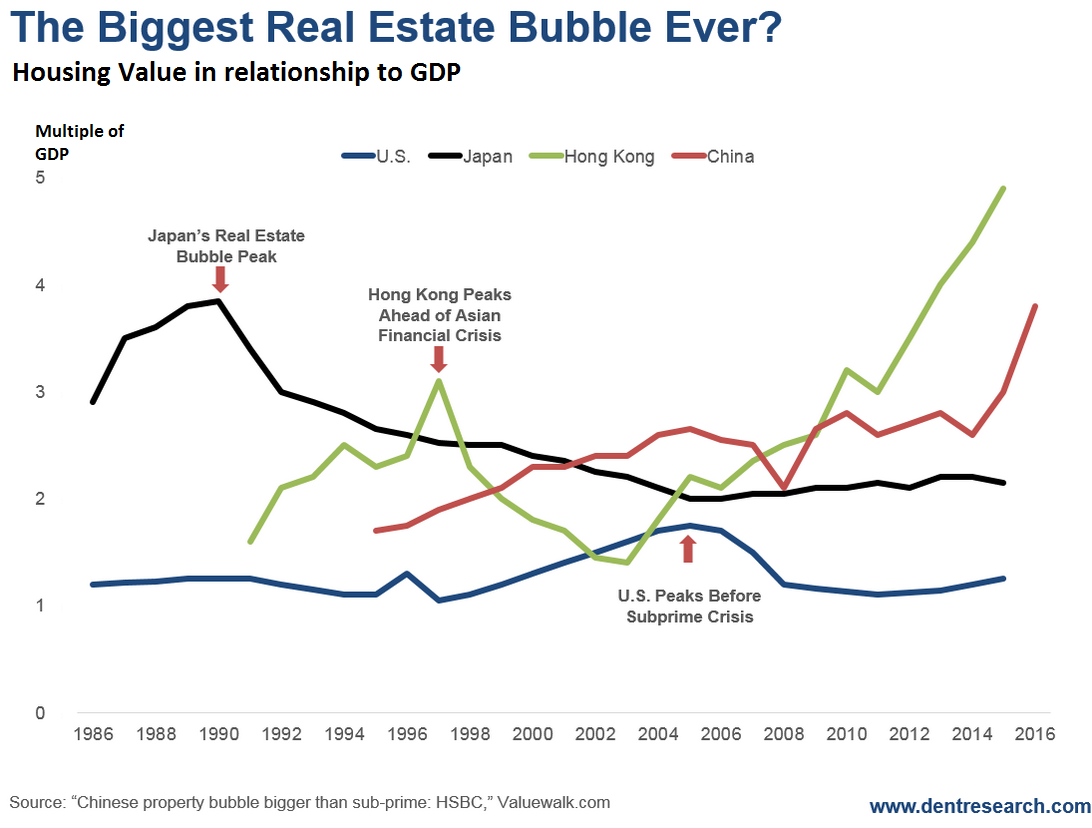 Japan’s great bubble (the black line) peaked in 1990 at 3.7 times GDP. Shortly after, property prices fell through the floor, losing 67%!

Hong Kong still holds the honors for the greatest bubble of all thanks to affluent Chinese laundering their money there, just like they are laundering it into other major English speaking cities around the world. Hong Kong’s housing value to GDP is now at 5.0 times and projected to go to around 5.5 by year-end.

Talk about a bubble looking for a pin! Chinese property owners are in for a rude awakening ahead!

The new trend in Shenzhen is 66 sq. ft. “closet condos,” with a fold down single bed, selling for $132,000. That’s $2,000 per sq. ft.! That’s pricier than Vancouver’s tiny condos, only in a city where the typical person earns a little less than $20,000 a year! It takes about seven times their income to buy a closet studio apartment.

With the Chinese investing 75% of their wealth in real estate, the collapse of this bubble will completely devastate the Chinese economy. Bringing forth the domino effect, the damage will reverberate around the world.

Everything we can expect to see in the forthcoming crash is documented in our report, “China’s Impending Collapse: The Demise of the Red Dragon.” It gives a full breakdown and analysis of the devastation this crash will have on the global economy. Get the report in your inbox here.

31 comments for “Chinese Property Owners are in for a Very Rude Awakening, but the Damage Will Reverberate around Globe”

But still up 4.9% from a year ago – outside of the prior quarter, the hottest year-over-year growth in 20 years.

END_OF_DOCUMENT_TOKEN_TO_BE_REPLACED

Spooked by inflation not being temporary.

END_OF_DOCUMENT_TOKEN_TO_BE_REPLACED

Everywhere but San Francisco? Only 11 of the 100 largest cities showed any year-over-year rent declines at all.

END_OF_DOCUMENT_TOKEN_TO_BE_REPLACED

A peek into the glass and windows shortage.