Hurtling toward a massive financial crisis.

Forty-five years and counting: We’ve been on a debt spree since the early 1970s when we went off the gold standard, covering every possible angle. Trade deficits, government deficits, unfunded entitlements, private debt – you name it! Our total debt has grown 2.5-times GDP since 1971.

How could economists not see this as a problem? How is this the least bit sustainable?

It isn’t. We’re hurtling toward a massive financial crisis, and all we have to show for it are financial asset bubbles destined to burst. And when they do, they’ll wipe out the artificial wealth they’ve created for many decades… in just a few years, as they did from late 1929 into late 1932!

The chart below shows the common-sense truth.

As with any drug – and debt is a financially enhancing drug – it takes more and more to create less and less of an effect. Eventually, you reach the “zero point” where there is no effect and the drug kills you from its very strain and toxicity.

We’re rapidly approaching that zero point, after every dollar of debt has produced less and less GDP steadily since 1966: 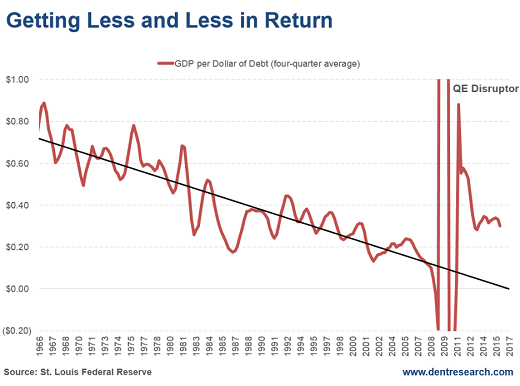 Note that the anomaly in the chart after 2008 was due to the impact of unprecedented QE. Ever since that disruption, the trends have pointed back down – making a beeline toward that zero point again.

Back in 2002, Swiss investor and market prognosticator Marc Faber published a similar chart. His findings showed the zero point for debt creation would occur around 2015. With updated data, we now see that the zero point will hit around the beginning of 2017.

In other words – right about NOW!

This is why central banks around the world have failed to spurn inflation despite endless money-printing. The more money they print, the less effect it has.

Just ask Japan. They’ve been doing this since 1997 with zero GDP growth and zero inflation, on average. Lately it seems like any time they get out of a recession they’re thrown right back into one!

But there is another ramification to all this money-printing…

When central banks create money out of thin air – through the fractional reserve banking system and through QE – it has to go somewhere.

When the economy is so indebted that consumers and companies can’t take on any new debts, the money can’t go there. So, it winds up going into financial speculation, especially as investment firms can lever up at little cost due to zero or negative interest rates. Stock prices bubble instead of inflation as the economy keeps sucking wind!

Sure enough, this next chart shows that debt and equity prices go hand-in-hand: 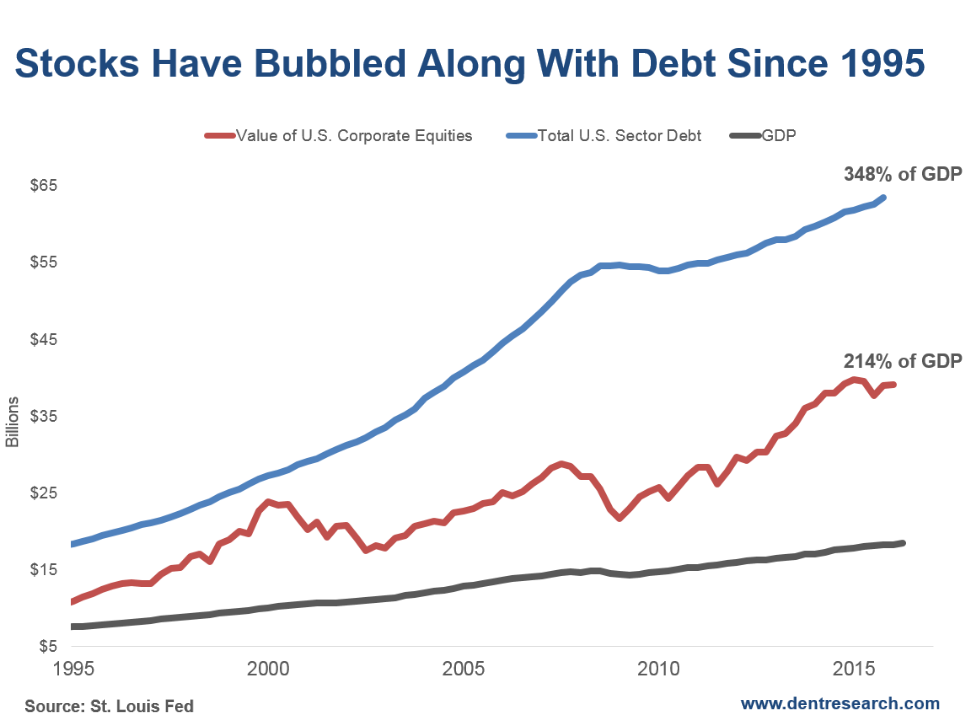 All told, these two combined are 588% of GDP, far more than any time in history.

Is this a bubble burst waiting to happen? Count on 2017 marking the beginning of the greatest crash we’ve seen since 1929-1932. And I have a new book coming out to commemorate this occasion, The Sale of a Lifetime, which will hit shelves on September 15. It  examines financial bubbles, and I couldn’t have picked a better time to release it, at the height of the greatest bubble in modern history.

We’re simply running out of time. With debt into the hundreds of trillions, rapidly growing debt-to-GDP ratios, and plummeting stocks for major banks all around the globe, it’s only a matter of time before the sky comes falling and investors get flattened! It’s no longer a question of “If,” but “When.”

In the latest infographic from Dent Research, The Global Banking Crisis 2.0, we break down the real numbers to show you what’s really going on, so you don’t end up a blind investor. Get it here.