It’ll devastate China’s economy and reverberate around the world

Only a handful of countries have a higher savings rate than the Chinese do. For a still relatively poor emerging country with GDP per capita about a fifth of that in the U.S., the Chinese get an A+ in this area.

But if diversification and asset allocation are the key to preserving wealth, then the Chinese get an F!

The reason: 75% of their wealth is in real estate. They’ve overinvested in one illiquid and bubbly asset that they wrongly believe can only go higher. Relative to income, China has seven of the 10 most expensive cities in the world.

In other words, it has the greatest real estate bubble in modern history!

That may not sound like a lot, but the average Chinese are only making about $10,000 per year! That begs the question: how do they even do it on their incomes!?

Wade Shepard went after this question in a recent Forbes article. In China, owning your home is paramount. If you’re a man, you have zero chance of getting a date if you don’t. But with home prices running at exorbitant rates, what are their chances?

It all comes back to China’s phenomenally high savings rate. Compared with about 2% in the U.S., the Chinese on average save about 30% of their income. And for the most affluent, it’s more than double that! 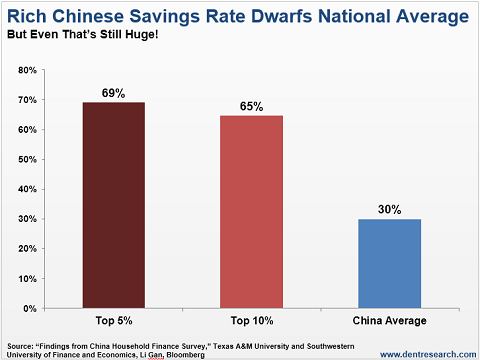 But it’s also the family and friends network that helps younger people buy such massively expensive homes – typically without a mortgage. Only 18% of homes have a mortgage, compared to half of all homes in the U.S., and the minimum down payment on first homes is 30%. For second homes, it’s 60%.

So the last thing China has to worry about is a foreclosure crisis like the U.S. saw with high percentages of homes in negative equity.

China’s problem… is that they’ve invested their high savings in a massive real estate bubble and don’t realize the risks to their wealth!

In urban areas, real estate has bubbled up between five and seven times just since 2000. It’s even greater than the unprecedented housing bubble in Japan in the 1980s, which suffered a 60% collapse that it’s never recovered from – even 25 years later.Bottom of Form

A 60% collapse is the minimum the Chinese should expect. But it would actually take 80% to get back to the pre-bubble values of early 2000.

This would be devastating to the Chinese. It is estimated that household wealth in China is $27.2 trillion, or about three times GDP. With 75% of that in real estate, that comes out to $20.4 trillion.

If real estate falls 60% as it did in Japan, that would mean $12.2 trillion in wealth would just disappear.

And if it falls 80%-plus due to the larger size of China’s bubble, we’re talking $16 trillion or more evaporating!

How would the already insecure Chinese consumers feel (after past poverty and weak social safety nets) if their rapidly built wealth suddenly disappears?

It means they’re going to spend less money! That will halt China’s efforts at expanding into a consumer-driven economy.

This crisis in China will be the largest relative evaporation of household wealth in modern history. And it’s all from their overinvestment in one illiquid and bubbly asset: housing. Among urban households, 20% own two or more homes, near twice the rate in the U.S.

But the Chinese not only overinvest in real estate – they often buy empty properties for the future, or even for pure investment. They don’t actually use these properties. An independent firm monitored homes that were using no electricity and found a 27% vacancy rate.

Who would speculate in real estate with 27% of condos empty!?

So, yes, the Chinese get an A for high savings, but their Achilles heel is an irrational belief that real estate will only go up, up, up! That is the worst assumption you could possibly make in the very country that has the greatest overbuilding bubble and the most overvalued real estate in the world.

What I see ahead: the sucking sound of shrinking savings!

Real estate prices are beginning to plummet in many cities. With 75% of Chinese wealth tied up in real estate, the implosion of this bubble will trigger the domino effect, just when the foundations of the over-indebted economy are already cracking. It will devastate the economy and reverberate around the world. Harry Dent and his team released an investigative report on China’s forthcoming crash and its consequences. Click here to get it for free.