It always pays to be cautious when other investors get greedy.

Perhaps more than just about any other research firm in the world, we’ve long warned that there will be serious consequences for the decisions we’ve been making lately.

But credit bubbles feel so good as they’re being blown up that it’s easy to forget what’s really happening behind the curtains to create the faux prosperity we’ve been enjoying for the last few years. So this week, here’s a gentle reminder about what’s really behind the soaring stock market and our growing economy.

The world’s three major central banks (the U.S., Europe, and Japan) have embarked on a massive financial experiment. They have created a gigantic amount of money out of thin air and used it to purchase mind-boggling quantities of government debt. In the U.S., our central bank now owns a pile of bonds equal to 20% of U.S. gross domestic product (GDP). Japan’s central bank’s pile of debt is equal to 40% of its GDP. At its peak, Europe’s central bank owned bonds worth nearly $4 trillion, or more than 25% of its GDP.

The effect of this buying in the world’s markets is difficult to overstate. It is not only the sheer enormity of these purchases. It is also the way the bankers have deliberately structured their purchases to warp the yield curve.

Consider the U.S. 10-year Treasury bond, for example. There is no more important financial benchmark in the world. It is hardly an exaggeration to claim that everything tradable in the world is priced off U.S. sovereign 10-year bonds. This is the globe’s benchmark cost of risk-free capital. It is from this price that all other forms of capital are priced.

Currently, there is about $150 billion worth of 10- to 15-year bonds outstanding. Out of the total $150 billion in circulation, the U.S. central bank owns more than half. Likewise, at the “long” end of the curve, the Fed owns nearly half of all Treasury bonds dated 20 years and beyond.

By lowering long-term bond yields, the Fed has artificially reduced the cost of capital by an unbelievable amount. And by making it much cheaper to borrow, the Fed has enabled virtually all borrowers to gain access to the bond markets. That’s clear by looking at the record-high issuance and record-low nominal yields in the high-yield (or “junk”) bond markets.

In June, with benchmark high-yield rates in the U.S. at a staggering 4.77%, low-quality corporate borrowers added $30 billion in debt to their balance sheets – an all-time single-month record.

And it’s also clear by looking at the colossal bubble that has formed in emerging-market debt. A brilliant New York hedge-fund manager pointed out that between 2009 and 2012, nearly $400 billion flowed into emerging-market credit markets – about four times more than average rates over the previous 10 years.

It doesn’t, of course. We should see vast misallocations of capital and a tremendous surge in speculation. To see both of those trends in action, just consider the amount of casino construction around the world over the past five years. This is the way credit bubbles work. But it won’t go on for long.

Economists who claim to know how all of this will end are lying. Nobody knows how (or when) it will end. Not even former Fed Chairman Alan Greenspan. I asked him these specific questions when I saw him last month at a conference in New Orleans. What he told me was frightening: He said that the central banks have no idea what they’re doing and that they will not be able to control the inflation that will inevitably result from this massive experiment.

Another guy who knows a little bit about investing has big concerns about what’s going on with banks. Investing legend Warren Buffett says currency-based investments (such as government bonds) should come with a warning label…

Most of these currency-based investments are thought of as ‘safe.’ In truth, they are among the most dangerous of assets… their risk is huge.

‘In God We Trust’ may be imprinted on our currency, but the hand that activates our government’s printing press has been all too human. High interest rates, of course, can compensate purchasers for the inflation risk they face with currency-based investments – and indeed, rates in the early 1980s did that job nicely. Current rates, however, do not come close to offsetting the purchasing-power risk that investors assume. Right now, bonds should come with a warning label.

So what should you do? First and foremost, realize that we are in the late innings of an enormous global bubble. The banks have propped it up with a printing press. But it can’t go on forever. All around the world, credit structures are in place that can only function as long as the central bank buying continues.

Central banks have proven adept at keeping these ridiculous credit structures in place. But there is a cost. And sooner or later, something will break… because capitalism doesn’t work when there’s no cost of capital.

Here’s what I think will break first: the emerging-market credit structure. Few economists know about the “Triffin dilemma” (named after economist Robert Triffin), which boils down to this fact: Global liquidity is determined by the current account of whatever country’s currency is used as the world reserve currency.

Today, that’s the U.S. dollar. For more than 40 years, the U.S. has recorded large (and growing) current account deficits with the rest of the world. This flooded the world with dollars, typically held in the form of U.S. Treasury bonds. These bonds are the heart of the world’s banking systems, making up more than 60% of all reserves.

Now, thanks mostly to the surge in domestic oil production, the U.S. current account deficit has slid from more than 6% of GDP down to around 2%. At the same time, the Fed has been buying back tons of U.S. Treasury bonds. The unintended consequence of these combined actions is a huge decrease in global liquidity.

Sooner or later, this is going to cause a big problem for countries like Turkey and Brazil, who owe foreign creditors dollar-denominated debts.

Turkey owes foreign investors $386 billion – roughly half of its GDP. About $160 billion of these debts come due over the next 12 months. And unlike the U.S. or Japan or Europe, Turkey can’t simply print away these obligations.

So will the big central banks begin buying emerging-market bonds, too? Anything is possible… But I don’t expect Turkey to do that. These defaults, which will definitely happen, will cause big problems in terms of political stability, currency values, and will inflict damage on banking systems across the world.

But during periods of stress – like late 2011 – TLT rallies while ELD declines. Since June, these two critical measures of the world’s credit markets have sharply diverged. I believe that’s a sign of things to come. I believe we’re in the early stages of the “end game” where the giant paper charade of the last five years unravels… 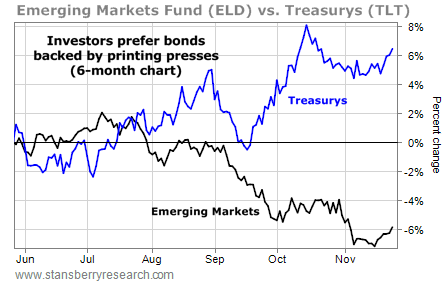 Regardless of whether I’m right or wrong, you should, at the very least, heed this warning. All that glitters is not gold. It always pays to be cautious when other investors get greedy.

And there is an abundance of signs of greed all around the market… from electric-car maker Tesla’s share price to the nominal yield on junk bonds. Make sure you don’t get swept up in the euphoria. Remember how fragile the world’s banking system is… And make sure to buy a little physical gold this year. By Porter Stansberry, The Growth Stock Wire

As new money is drying up, bondholders are beginning to grapple with the sordid meaning of “junk.” Read…  Junk Bond Carnage, One Company at a Time

END_OF_DOCUMENT_TOKEN_TO_BE_REPLACED

Store rents had already plunged, amid a surge in vacancies. Then in the spring, the market froze; when it thawed, rents dropped to 10-year lows.