Don’t let a good crisis go to waste – that appears to be the newest slogan of Russian President Vladimir Putin, as his approval rating in Russia soared from 54% a year ago to 83% now, matching the record of the data series in 2008, when he switched roles to become Prime Minister. The rating was, as Gallup put it, “likely propelled by a groundswell of national pride with the annexation of Crimea in March on the heels of the Sochi Olympic Games in February.”

By contrast, President Obama’s job approval rating in the US, according to Gallup’s daily tracker, languishes at a miserable 42%. Bad, but still head and shoulders above the most despised tax-and-retreat French President of the Fifth Republic, François Hollande, whose approval rating has finally stopped plunging once it got to about 20%.

But it’s not just Putin

Russian’s confidence in their military jumped to an all-time record of 78%, up from 65% a year ago, wowed perhaps by the military’s awe-inspiring performance in the Crimean debacle.

Confidence in the Russian government skyrocketed from 39% in 2013 to 64% now. And that at a time when the US Congress is mired down in a well-deserved or perhaps too generous job approval rating of 15% by the hapless American voters who just can’t seem to figure out how to throw the rascals out.

The crisis also has given the Russian government a boost overall: 73% of Russians believe their government is leading them in the right direction, a majority for the first time since 2008, when Putin left the presidency. Russians really do have confidence in him, and they miss him when he’s gone. Yet, their economic outlook, while up, remains crummy: only 35% see conditions getting better, but 19% see them deteriorating.

And even Russians’ confidence in the elections has soared, albeit from an abysmal 23% in 2013 to a somewhat less abysmal 39%. That’s more than double the terrible level of 2006 and 2007, during Putin’s first reign, when only 17% of the Russian were confident in the honesty of their elections. Well, OK, honest or not, but at least they got their Putin back.

Here is Putin’s all-around triumphant chart, where everything has soared since last year: 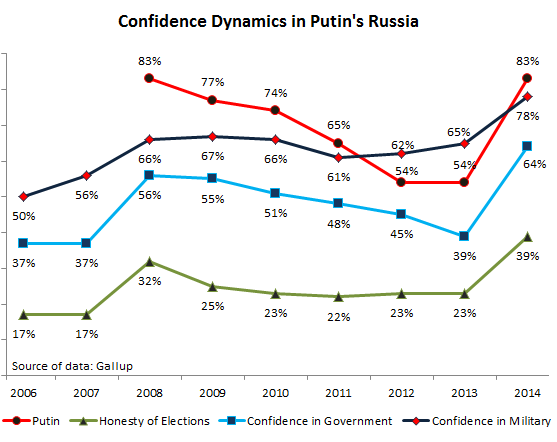 And what do Russians think about America?

Man! First the good news. For China, that is. The $400 billion holy-grail natural gas deal Russia inked with China, with money flowing one way and gas the other, and all the hope and hype that came along with it have endeared China to the Russians. Their approval rating of China jumped on cue, from 25% last year to 42% now. The fact that China had Russia in a vice when the final touches were put on the deal and was thus able to extract pricing that would be good only for China has been lost somewhat in the shuffle at home. But hey.

Instead of offering Russia some kind of holy-grail deal on energy, the EU and the US have engineered an ingenious sanction spiral that so far has done wonders. In return, Russians’ approval of the EU swooned from 21% to 6%, and of America from the already awful 16% to 4% (not a typo). The diametrically opposed movement of China and the US looks terrible: 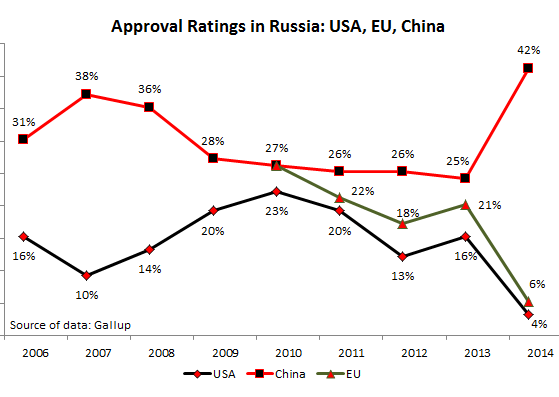 But it might even be worse: Given the survey’s margin of error of ± 2.7 percentage points (at a 95% confidence level), the approval rating could actually be as low as 1.3%. That’s as close to zero as you can get in a survey!

So if our local heroes, Obama and Congress, with their phenomenally well-thought-out reactions to the fiasco in the Ukraine, are trying to win the hearts and minds of the Russian people so that they could apply some pressure on Putin (LOL), they have abysmally failed. And in regards to his standing in his country, Putin is once again grinning his wicket triumphant smile. So far for him – at least through the period when the survey was conducted – the crisis has been a flawless success.

Capital flight, particularly from the vast underground economy, is Russia’s most pressing economic problem. And Putin’s angle of attack has been, well, brutal in its own way. Read…. Sanction Spiral Hits London, Plays Into Putin’s Master Plan

5 comments for “Putin’s Approval in Russia Soars to Record, America’s Plunges to Near Zero”